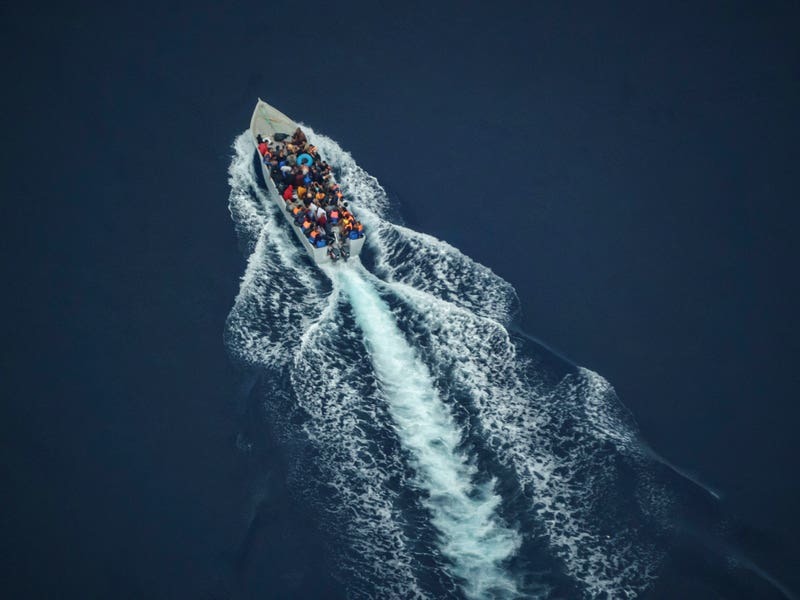 Volunteers in the sky try to monitor migrant boats

A humanitarian effort to help rescue migrants fleeing Libya to Europe by boat and monitor human rights abuses has soared over the Mediterranean Sea.

Volunteers aboard the Seabird watch from above as the fragile boats attempt the perilous crossing – with nearly 23,000 people dead or missing trying to reach Europe since 2014, according to the UN.

The twin-engine aircraft, owned by the German organization Sea-Watch, is tasked with documenting human rights abuses committed against migrants at sea and relaying cases of distress to ships and nearby authorities who have increasingly ignored their calls.

On a cloudy October afternoon, an approaching thunderstorm heightened the dangers for a white dinghy speckled with dozens of African migrants.

The captain of the Nour 2 agrees to change course and check the fragile boat. But after seeing that the boat was flying a Libyan flag, the migrants refused its assistance, the captain said.

“They say they only have 20 liters of fuel left,” the captain told the Seabird. “They want to continue their journey.”

The destination of the small boat was the Italian island of Lampedusa, where tourists seated in outdoor cafes were oblivious to what was unfolding about 60 nautical miles south of them.

Mr Bretschneider, a 30-year-old social worker, did some quick calculations and concluded that the migrants must have left Libya around 20 hours before and still had around 15 hours ahead of them before reaching Lampedusa – if their boat did not s not collapse or capsize first.

Despite the risks, many migrants and refugees say they would rather die trying to cross to Europe than be sent back to Libya where, upon disembarkation, they are placed in detention centers and often subjected to constant abuse.

Unsurprisingly to them, they received no response – activists have grown accustomed to their distress calls going unanswered.

Running out of fuel, the Seabird had to leave the scene.

“We can only hope that people will reach the shore or be rescued by a European coast guard vessel,” Mr Bretschneider said as the plane began to return to base.

For years, human rights groups and legal experts have denounced the fact that European countries are increasingly ignoring their international obligations to rescue migrants at sea.

Instead, they have contracted rescues to the Libyan Coastguard, which has a history of reckless interceptions as well as links to human traffickers and militias.

According to the Italian Interior Ministry, more than 49,000 migrants have reached Italian shores so far this year, almost double the number who crossed during the same period last year.

So far this year, it has intercepted around half of those who have tried to leave, returning more than 26,000 men, women and children to Libya.

Sea-Watch has relied on millions of pounds from individual donations over several years to expand its air monitoring capabilities.

He now has two small aircraft which, with a bird’s eye view, can find boats in distress much faster than ships.

But even when flying low, finding a small boat in the vast Mediterranean can tire the most experienced eyes.

The three to four person crew of volunteers flags every little speck on the horizon that could potentially be people in distress.

“Target at 10 o’clock,” alerted the Seabird’s photographer sitting in the back on a recent flight.

In rough seas, crashing waves can play tricks and, for brief moments, look like wobbling boats in the distance.

Often the “targets” turn out to be nothing at all, and the Seabird returns to shore hours later with no new information.

Finding boats in distress is only the first challenge. Rescuing them is just as difficult, if not more difficult.

In the absence of state rescue vessels and NGO vessels increasingly blocked from leaving port, Sea-Watch often relies on the goodwill of merchant ships sailing in the area.

But many are reluctant to get involved after several commercial vessels were stranded at sea for days as they waited for Italy or Malta to grant permission to disembark the rescued migrants. Others brought them back to Libya in violation of maritime and refugee conventions.

Without any state authority, the Seabird can only remind captains of their duty to rescue those in distress.

On another mission a few days later, the Seabird returned from its flight not knowing what would happen to the people they had seen on a white rubber dinghy.

Mr. Bretschneider checked his phone at dinner that evening, hoping for good news. Across the Mediterranean, 17 bodies had washed up in western Libya, apparently from another boat.

The next day, the Seabird sets out again in search of the white inflatable boat, in vain. On the way back, the crew received a message from land.

The white dinghy had reached the waters near Lampedusa and was recovered by the Italian coast guard. The people had succeeded.

Attorney General Bonta: Predatory lending and illegal bank leasing schemes have no place in our financial system | State of California – Department of Justice