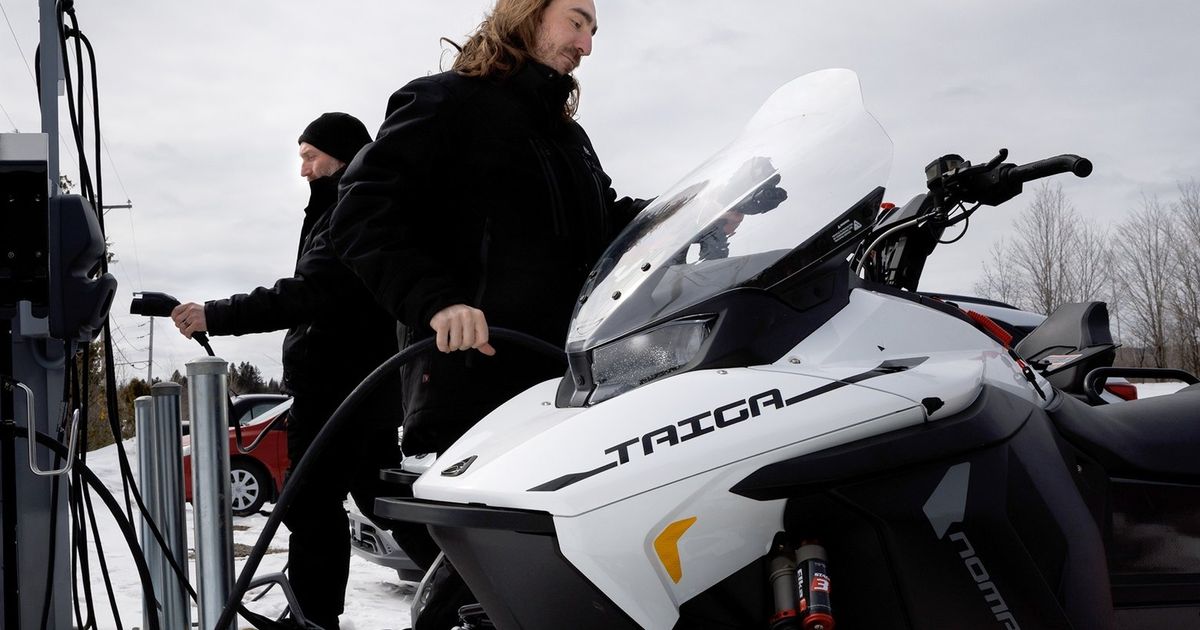 STOWE, Vermont — Snowmobiles are part of the winter soundtrack in this part of Vermont, at worst breaking the silence of the forest like motorcycles on skis. But motorized sleds bouncing along a wooded mountain trail in February were quiet save for the sound of metal runners on snow.

The machines, made by Canadian start-up company Taiga, were battery-powered – the first electric snowmobiles to be sold on a large scale – and symbols of how vehicles of all kinds are migrating to emission-free propulsion. Taiga also offers battery-powered personal watercraft, another form of recreation where the gas-powered version is seen in some quarters as a bane.

Although electric cars are getting the most attention, electric lawn mowers, boats, bicycles, scooters and all-terrain vehicles are proliferating. In some categories, battery-powered machines are gaining market share faster than electric cars are taking over the automotive world. Startups woo investors claiming to be the Teslas of the boating, cycling, or lawn and garden industry.

The environmental benefits are potentially significant. Unlike cars and trucks, outboard motors or lawn mowers generally do not have catalytic converters to reduce harmful emissions. They are noisy and often use lesser quality fuel. A gas-powered lawnmower generates as much pollution in an hour as a 300-mile car trip, according to the California Air Resources Board.

California passed a law banning gas-powered mowers starting in 2024 and all new gas-powered vehicles by 2035. But sales of electric alternatives are growing even without government help.

One of the first customers for Taiga snowmobiles was Taos Ski Valley in New Mexico, which bills itself as an environmentally conscious ski resort. Taos Ski Patrol and trail maintainers will use the electric snowmobiles for tasks such as transporting injured skiers or servicing snowmaking equipment, Taos Ski Valley CEO said, David Northen. When skiing resumes this year, Taos also plans to deploy an electric groomer made by Kässbohrer Geländefahrzeug, a German company.

Even though the electric snowmobiles, which start at $17,500, are more expensive than their gas-powered counterparts, which can be had for less than $10,000, the resort will save money on fuel and maintenance, said Northen.

“You do the cost-benefit analysis, you’re probably close to breaking even,” he said. “These are not just decisions for the environment, but also good decisions for our bottom line.”

But sometimes people convert to electricity because it offers practical benefits.

Buyers of electric lawn and garden equipment surveyed by Freedonia Group, a research firm, cited reduced noise, low maintenance costs and no storage of gas cans in the garage as their most important priorities. Often, electric leaf blowers or trimmers are cheaper and lighter than gas-powered versions.

But electrifying boats and other vehicles often presents technological challenges. Electric power works for small craft or boats that don’t travel very far. This is the only option on the hundreds of lakes where conventional outboard motors are prohibited due to noise or pollution.

Because water creates so much resistance, however, large motorboats require amounts of continuous power that are beyond what batteries available today can provide. (Sailboats, of course, have been powered by wind power for thousands of years.)

Batteries are “part of the answer going forward but not necessarily the complete answer,” said David Foulkes, CEO of Brunswick, which makes Mercury marine engines.

Still, Mercury has unveiled a prototype electric outboard motor and is watching the move to electrification carefully.

“We intend to be a leader in this area,” said Foulkes, who drives a battery-powered Porsche. “Even though the market is small at the moment, we want to be there and see what the market is doing.”

Taiga CEO Samuel Bruneau said electrifying snowmobiles was a challenge because the batteries and motors had to deal with extreme temperatures and rough terrain.

“Nobody was entering that space, because it would require new technology,” he said. “That’s the opportunity we saw.”

The competition is coming. BRP, a Quebec-based company that manufactures Ski-Doo snowmobiles as well as all-terrain vehicles and motorboats, announced that it will offer electric versions of all of its products by 2026. The company also plans to enter the motorcycle market with a range of electric two-wheelers in 2024.

“There is a trend that is driven by the automobile,” said José Boisjoli, CEO of BRP, which is the largest manufacturer of snowmobiles. “We can’t ignore it.”

But he said the transition would be slower in leisure. For one thing, markets are much smaller, making it harder to realize the cost savings that come with mass production. Fewer than 135,000 snowmobiles were sold worldwide in 2021, compared to around 60 million cars.

And snowmobiles and motorboats don’t get the government subsidies or tax breaks that can shave thousands of dollars off the price of an electric car. Charging is also an issue in the woods. Taiga has installed charging stations along a popular snowmobile trail network in Quebec, and is planning more.

But snowmobilers who venture deep into the wilderness will always prefer gasoline, Boisjoli said. “The combustion engine will be in snowmobiles for a long time,” he said.

Dominic Jacangelo, executive director of the New York State Snowmobile Association, agreed that long-distance snowmobilers, who can easily cover more than 100 miles a day, would be skeptical.

Still, Jacangelo said he was eager to try a Taiga. “Performance-wise, you have a sled that will keep up with anything on the market,” he said.

Because electric snowmobiles are quieter, they could help reduce friction between snowmobilers and people who view machines as an affront to nature. This would open up more terrain for snowmobiles.

“Certainly,” Jacangelo said, “an electric sled will change the view of snowmobiling for a lot of environmentalists.”

This story originally appeared on nytimes.com. Read it here.