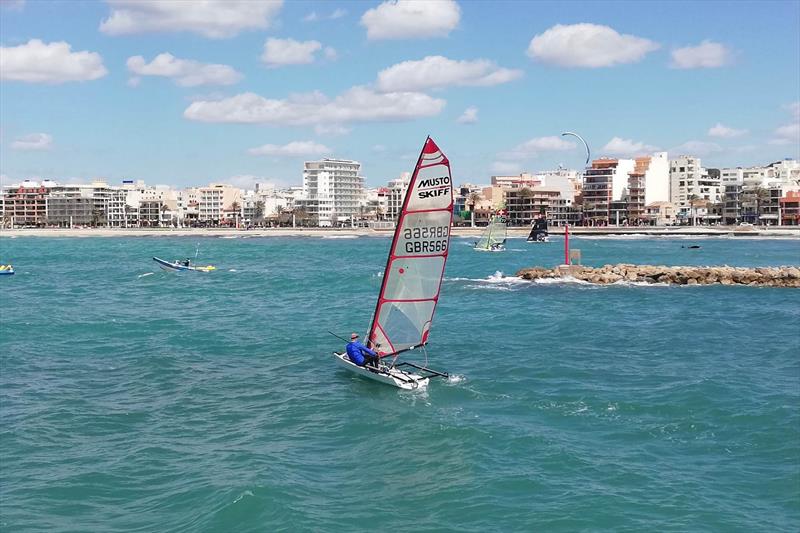 Club Nàutic s’Arenal (CNA) in Palma, Mallorca is a fantastic venue for sailing, and it was great for the Musto Skiff class to be invited to join the prestigious Princess Sofia Regatta 2022 for a 4 day event March 31 for April 3.

A total of 19 Musto Skiffs took part in the event, which was planned as a European championship. Several World Sailing regions were represented, including the UK, Spain, Switzerland and South Africa. Here’s the full report from the event, which saw a close battle for championship victory between training partners Andy Tarboton and Peter Greenhalgh, and an even closer battle for a podium place between training partners. GBR Northern Circuit training, Jono Shelley, Euan Hurter, and Jamie Hilton.

It was an unexpected start for the Musto Skiffs at the Princess Sofia Regatta, but there was a buzz around the boat park, with the class eager to race together after so long. The race was scheduled to take place at 1 p.m. local time, with 3 races (2 stages) scheduled.

It was a difficult first day to start the regatta! Not too many spills in the day, but lots of thrills as the boats were able to change many places with each leg – either doing it right or wrong.

The breeze was up and down, and the local boys showed their experience with good pace and smart tactics. The fleet was quite tight in all 3 races which put pressure on the sailors to keep their heads out of the boat and watch the road ahead.

Swiss sailor, Alex Greil had a good day. He showed his experience and ended up in 3rd place in the final race. RSA sailor Euan Hurter showed training over the Scottish winter hadn’t been too hard and he was the king of all-day consistency. In the Spanish fleet, Joan Rossello Gelabert came out ahead of the locals despite fierce challenges from his local sparring partners and found himself in 6th place.

It was great to be in the bay alongside the Olympic classes as they prepared for the start of their regatta on Monday! The next few days promise more intense racing as Palma promises to test every sailor thoroughly.

We talked all week at the boat park, the beach and the bars on Fat Friday; and he certainly delivered. The fleet was held ashore under AP with the Bay of Palma reminiscent of the foam parties so famous in the resort town of Magaluf across the bay. The fleet was finally encouraged with the AP dropping at around 3pm for what turned out to be 2 fruity runs at around 18-22 knots.

Hilton and Shelley showed well in their “winter coats” but were unable to wrap things up on either tour; First Hilton swam on the jibe, then Jono missed a flurry to pass hard-pressing Justo for line honors in the first race of the day. In the next, Turbo (Tarboton) and Peter fought a close battle at the sharp end – both looking almost seamless (from afar) and showing the benefits of winter training – with Peter narrowly claiming victory.

Special mention for Richard Smith, who, after suffering damage to a sail before the race, was able to disembark in the test conditions, make a stop at the Formula 1 pit and set off again for the second and last race of the day. .

Day 2 ended with Peter Greenhalgh and Andy Tarboton retaining their 1st and 2nd places, and Jono Shelley moving up to 3rd place.

Another big day on the water with the wind still westerly and a substantial side swell wrapping around the bay to really test people’s outings. Very high takedowns were reported this afternoon, especially with almost everyone practicing their swimming skills at some point. Keeping the boat moving in the chop is enough of a task without looking around and strategizing. This proved too much for young Euan Hurter who fell asleep at dinner later that evening – much to the amusement of his comrades! To his credit, he did a pretty good job of staying consistent and showing good pace.

The Spaniards have fought well so far in this championship, sometimes showing high quality sailing, blistering speeds and blistering starts and now locals Justo, Joan and Mario are within striking distance of each other before the last day. race.

The Scottish contingent flew around the racecourse faster than kilts leave the shelves at a Black Friday sale. However, beloved Scotsman Robbie Wilson missed the race yet again, after suffering a stomach bug on day two of the Championships.

Bruce Keen, tougher than ever, is now learning to talk nicely about his charter boat in the front row of the pony parade. He is now two steps from the podium. Alex Greil shows that he is as good in the waves as he is on a lake and can never be counted out.

Peter Greenhalgh has held the lead for the 3 days of racing so far and won’t give it up easily. The Super Sunday showdown sees the forecast for a complete change in wind direction and the elements will surely produce a worthy podium.

On the last day, capricious winds made the race difficult and the management of the race even more difficult. This resulted in two abandoned runs before we finally made it through two runs with snakes and ladders. Two races also meant the 2nd gap would come into play.

Peter Greenhalgh pushed hard all week but arguably landed shorter ladders and longer snakes. It was a VERY close battle between Warsash’s training buddies but Andy Tarboton mastered the conditions superbly as he had all week and took a deserved championship victory with only 1st and 2nd place in the ranking once the deviations have started. Jono rounded off the podium to claim the best title of the rest.

The class looks forward to making this an annual event and hope to be invited back in 2023. Thanks to David Rickard and Justo Martinez Balaguer for making the event possible, and to the amazing team and race committee at CNA for for hosting the Musto Skiff class at Princess Sofia Regatta 2022. A final thank you to the class’s title sponsor, Musto, who provided a range of merchandise prizes for the top five places.

Preamble to the monetary policy review: nudge but don’t rock the boat