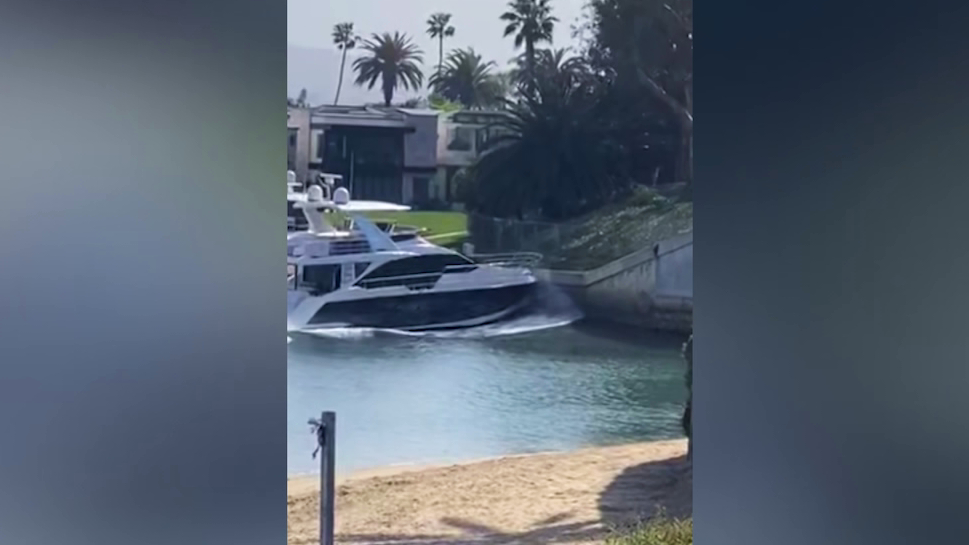 The theft occurred around 10 a.m. in Newport Beach Harbor, a spokesperson for the Orange County Sheriff’s Department told Nexstar’s KSWB. Deputies from the Harbor Patrol Unit were dispatched to arrest the man after reports he had commandeered a 60ft yacht.

Within minutes, the man slammed into a sailboat and at least one other vessel before colliding with a seawall near a bridge, the sheriff’s department confirmed.

Dylan Eckardt, who works nearby, took video of the wild ride.

“I realized it was a man making ‘doughnuts’ in a boat,” Eckardt told KTLA. “(He) ran onto the sailboat and then a woman was on the back of the sailboat screaming. So my first reaction was to make sure the woman was okay.

Debora Dolly, the woman aboard that boat, told The Associated Press she was knocked down by the collision but not seriously injured.

After ramming the sailboat, the stolen yacht sped across the bay, eventually colliding with another boat and slamming into the breakwater, as recorded video shows another witness Tareq Risheq. Shortly after, officers boarded the vessel and arrested the man.

“I saw the guy freaking out, and he was actually screaming, he was hurt and he was lying down,” Risheq told KTLA. “And then the harbor patrol and the coast guard and the sheriff, they all came and surrounded him.”

Joel Siam, a 38-year-old man from San Diego, was taken to jail by the Newport Beach Police Department, the sheriff’s official said. According to the AP, he was suspected of grand theft of a boat and possession of a stolen boat and was jailed on $3 million bail.

The yacht was docked for maintenance and the keys were inside when it was taken, officials told the AP.

While the sheriff’s department said Harbor Patrol only intervened once the boat was stolen, police were already in the area looking for Siam before he boarded. It was originally reported that he was vandalizing cars on a nearby street, KTLA reports.

Will Evinrude boat engines ever come back?