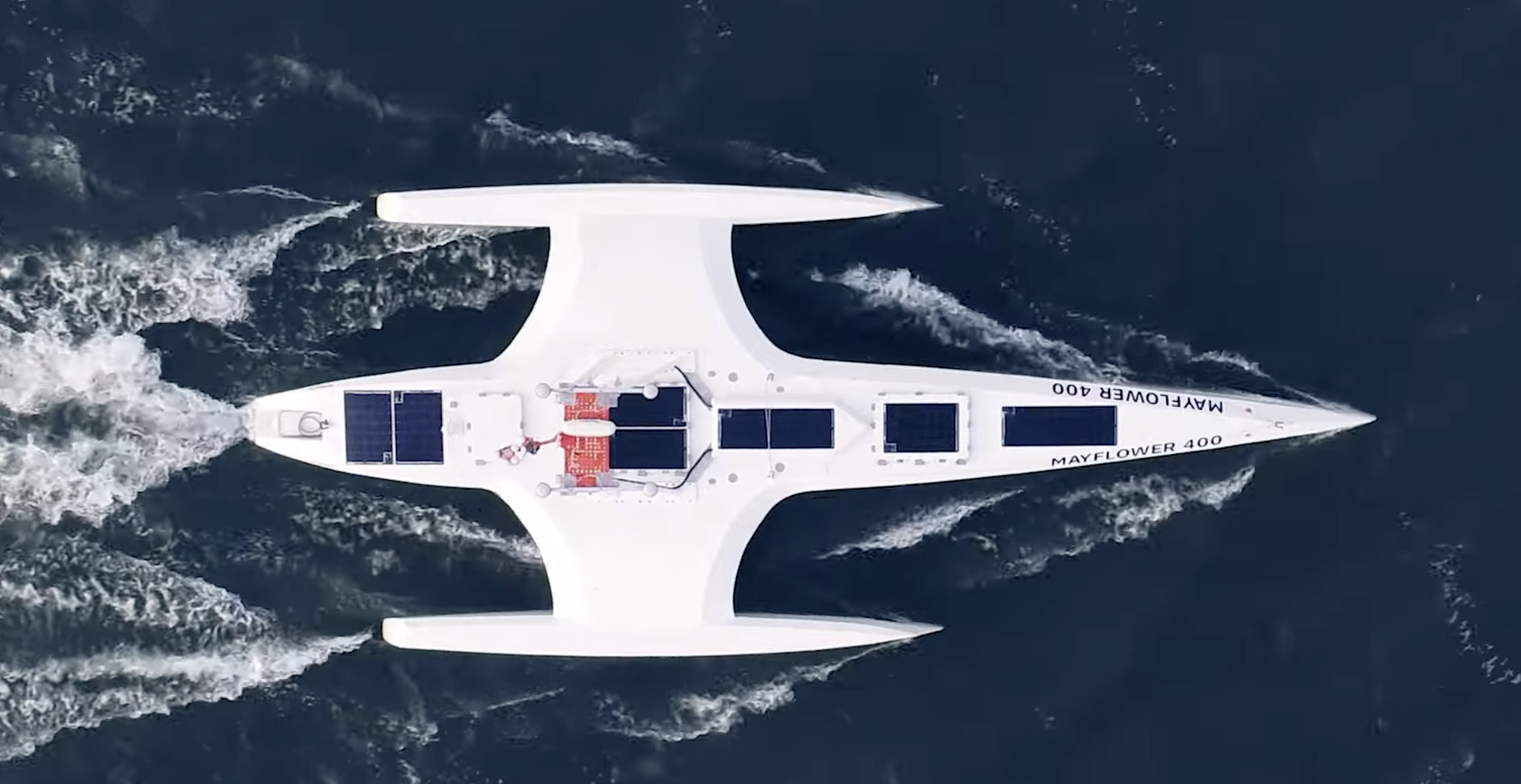 The UK is providing the navigation data to help an unmanned boat cross the Atlantic this year, a project which the ship’s backers say will usher in a new era of autonomous, remote-controlled or self-assisted navigation .

As with autonomous land and air transport (i.e. driverless vehicles and drones), developers hope that robotic ships could one day offer benefits in terms of the environment, sustainability, efficiency and cost.

These would be on a sliding scale from new AI systems to aid sailors to fully autonomous and unmanned craft.

The Mayflower Autonomous Ship (MAS) is an unmanned, AI-driven robotic research vessel originally designed to commemorate the 400e anniversary of the Mayflower voyage, as the name Mayflower 400 on the boat itself suggests.

It has six AI cameras, 30 other sensors and 15 advanced devices on board, but no human crew. The MAS can see 2.5 nautical miles ahead, recognize other vessels and, through its onboard computer vision system, identify hazards such as partially submerged wrecks or lost shipping containers.

Later this spring, MAS will set out to cross the Atlantic from Plymouth Sound in the UK, where it is moored, to Plymouth, Massachusetts, USA. The inspiring 3,244 nautical mile journey will follow the route of the 1620 Pilgrims’ journey in the original Mayflower to what was then called the New World.

In this way, its developers hope to welcome another new world – that of autonomous and AI-assisted navigation, which could one day include container ships, tankers and even passenger ships.

It will be the second historic crossing attempt, after MAS was forced to turn back just three days after the start of the first in June 2021, when it developed a minor fault. You can follow the progress of the boat live on his website.

The solar-powered vessel was proposed in 2016 by Brett Phaneuf, founder and CEO of Submergence Group in the US and M Subs Ltd in the UK. A new company, Marine Ai, emerged from the latter.

The MAS project is now led by ProMare, an American non-profit organization that promotes marine exploration, and is supported by IBM (provider of the computer vision system) and a global consortium of other technology and academic research partners. , including six British universities. Meanwhile, the UK Hydrographic Office (UKHO) revealed this week that it is the provider of S-100 navigational data for MAS and is funding its integration with AI and automatic boat learning.

S-100 is a new data model and standard developed by the International Hydrographic Organization (IHO).

According to a UK government announcement, this will be the first time that S-100 data will be tested on board an unmanned or autonomous marine vessel. Ongoing trials in UK waters are testing the boat’s ability to read, integrate and use the new data format, and will include MAS simulating the behavior of a much larger vessel: a frigate.

This project will be highly relevant to the S-100 use case, as it will provide insight into the usefulness of the S-100 data and format.

It will identify data gaps and method of deployment and integration, and provide real-world operational testing that will inform future deployments of UKHO’s S-100 data to other ship operators with and without crew around the world.

The MAS project will also contribute to advancing the state of the art in maritime autonomy and will be crucial for the advancement of autonomous navigation.

So what is the technology for?

Benefits on the rise…

Many large ships today, such as tankers, container ships and ferries, are old, slow, dirty, polluting and expensive to operate, both in terms of fuel and because they need many human crews.

Moreover, it makes the process slow and extremely expensive to hire vessels for a range of other tasks, including maintenance tasks on offshore energy platforms.

Proponents of autonomous ships believe that developing a new generation of ships that can, to a large extent, operate themselves will solve many of these problems, while introducing navigational aids and other systems that will benefit to human sailors.

The technology would also have significant military applications: robotic warships, autonomous support vessels, unmanned surveillance craft and submarines. Robotic submarines have, of course, been with us for many years. Most are tethered, remotely operated underwater vehicles (ROVs) used for deep-sea exploration, maintenance and engineering tasks, rather than the newer generation of autonomous underwater vehicles (AUVs). Autonomy has a real use under the waves, because radio signals do not propagate well in sea water.

However, as with autonomy on land and in the air, autonomous navigation typically faces enormous legal, regulatory, social, employment, and trust hurdles, given the centuries of human expertise and skills required. to ocean navigation and the local economies that rely on it.

As a result, the market will be fraught with risk, including opposition from the thousands of skilled people that shipping lines currently employ. The recent controversy over P&O laying off its UK crews and then hiring cheaper agency workers would be a drop in the ocean compared to possible industry-wide opposition to autonomous shipping.

Any death, loss of cargo, collision or accident involving a robotic vessel would also usher in a new world of legal, liability and insurance complexities – not to mention countless opportunities for crime, such as fraud and theft.

In the years to come, actual advances in driverless vehicles and autonomous or remotely piloted delivery drones will reveal the gaps – if any – between technological promise, social acceptance and economic profitability. These lessons will inform the decisions of shipping industry disruptors and their investors.

No one doubts the innovation, engineering expertise, academic depth and ambition behind all forms of autonomous transportation, or the scale of the environmental challenge. These research programs are already producing technologies that help humans and can make them safer: new sensors and driver assistance systems, for example. These are welcome and projects like MAS introduce them to the maritime world.

But common sense is missing in some of the markets being considered for unmanned transport, as explored in my recent reports on urban delivery drones. Many innovations introduce at least as many problems as they solve, which is why some programs are scaled back.

Meanwhile, confidence in any unmanned seagoing vessel that transports humans or essential supplies will remain low for the foreseeable future. Losing an unmanned boat in the middle of the Atlantic is one thing, but an autonomous boat full of passengers, food or raw materials would be another.