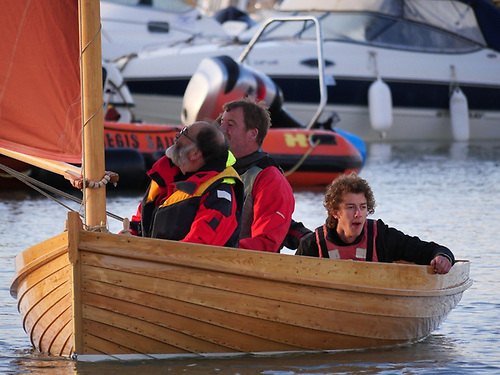 At the end of 1896, the Bray Sailing Club decided to hold a competition among its members to design a new one-design dinghy suitable for the harsh sea conditions that prevail off Bray, County Wicklow. The winner of the competition was twenty-six-year-old clothier William Ogilvy, an experienced sailor who proposed an open catboat, twelve feet long by six feet wide, to be built with the best spruce and elm trees. quality. The boat was designed to carry a 100 square foot mainsail and a traditional cotton spinnaker piloted from a long spinnaker pole.

A contract was made with Mr. Greg Foley of Ringsend to build seven boats, called ‘Droleens’ (or troglodytes), and deliver them to Bray by train, all for Â£ 9 each. The sails were made by Madders of Wivenhoe, Essex, England, for Â£ 1-8. These small boats offer such a sport that during 1897 this Foley received two other orders to build Droleens to join the fleet at Bray. Being a great sailor, he has competed in regattas along the County Dublin coast, the Howth Sailing Club, the Clontarf Yacht and Boat Club, Kingstown Township Regatta (now Dun Laoghaire) and Dalkey Regatta.

In 1897 Irish weather presented a beautiful silver cup called the “Irish Times Challenge Cup” for which the Droleens would compete, which was won by Mr Joseph Edward Mills at Katie. Mr. Mills was a caterer and confectioner who owned a shop in Merrion Row in Dublin with his son, Joseph Edward junior.

Fortunately, the Irish Times Challenge Cup was rediscovered and it seemed appropriate for the Droleens to compete for the silver cup again.

On August 29 this year the Droleens will take to the water again, this time at Dun Laoghaire, hosted by the Royal St George Yacht Club for the first time in one hundred and twenty-four years to compete again for the historic ‘Irish Times Cup of the challenge. ‘ Are there Droleens? We have promises of four boats coming to Dun Laoghaire, a Droleen built by volunteers from Bray (of course), a Droleen built by Lyme Regis Academy in Donegal, a Droleen professionally built by Co. Cavan owned by an owner of Dublin and a Droleen built school in Barna, County Galway.

A Droleen sailing in Bray Harbor in County Wicklow

None of these boats have ever been raced or seen together.

The Droleens, being twelve feet long, will compete against the 1913 International 12ft Dinghies and the 1969 Dublin Bay Sailing Club 12ft Dinghy, which shares the 1913 hull but with more modern rig. Will the Droleens be faster than the new 12ft models? The Droleen have sufficient width to carry a larger sail area. However, we have to wait until August 29 to find out which one works best in Dun Laoghaire.