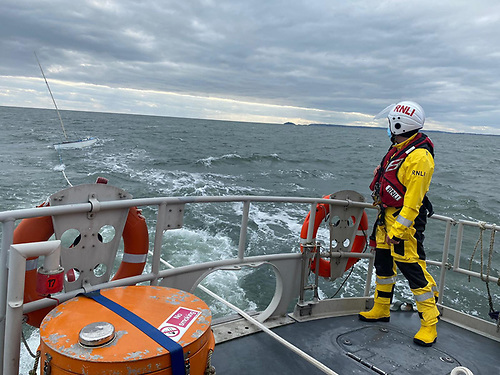 The volunteer crew of the Youghal RNLI lifeboat rescued five people off Capel Island near Knockadoon in the Youghal Bay area this afternoon (Monday April 5) when the two GP14 dinghies in which they were found capsized, leaving an adult and four teenagers in the water. The request to launch the lifeboat was made by the Irish Coast Guard and the lifeboat crew were joined for the rescue by Ballycotton RNLI, Youghal Coast Guard Unit, Rescue 117 and the Irish Lights Vessel, the Granuaile, along with local guards and paramedics in a multi-agency response.

Launched at 3:23 p.m. in cold and choppy conditions, the inshore lifeboat arrived at the scene within 15 minutes to find three people clinging to an overturned boat. The volunteer lifeboat crew quickly brought the three people aboard the lifeboat. While carrying out the rescue, they learned that a second sailboat had capsized about half a mile away. The second boat, which had been on the water with the first, was quickly located and two people were rescued from the water by the crew of the Youghal lifeboat.

While the RNLI was carrying out the rescue, they learned that a second GP14 had capsized about half a mile away.

The five were taken to Knockadoon Pier after being in the water for around 30 minutes and placed in the care of the Youghal Coast Guard Unit and Ambulance Service. Rescue helicopter 117 and the GardaÃ­ were also at the scene.

Youghal RNLI then returned to the capsized ships and with the help of the Ballycotton RNLI and the Granuaile both boats were righted and towed to Knockadoon Pier.

The five GP14 sailors involved were all wearing life jackets, they had a personal locator beacon, which activated when they entered the water, and they also had a cell phone, which they used to call emergency services. emergency

Speaking after the call to Mark Nolan, Youghal RNLI’s deputy launch authority said: “The success of today’s incident is largely due to the security measures taken by the five people involved. All were wearing life vests, they had a personal locator beacon, which activated when they entered the water, and they also had a cell phone, which they used to call emergency services. elements enabled a swift response and a successful rescue from all agencies involved. ‘

â€œI would also like to praise the actions of our volunteer lifeboat crew here in Youghal who took the five victims from the cold water. We wish a speedy recovery to the five people who were rescued.

Queen of the harbor this weekend –