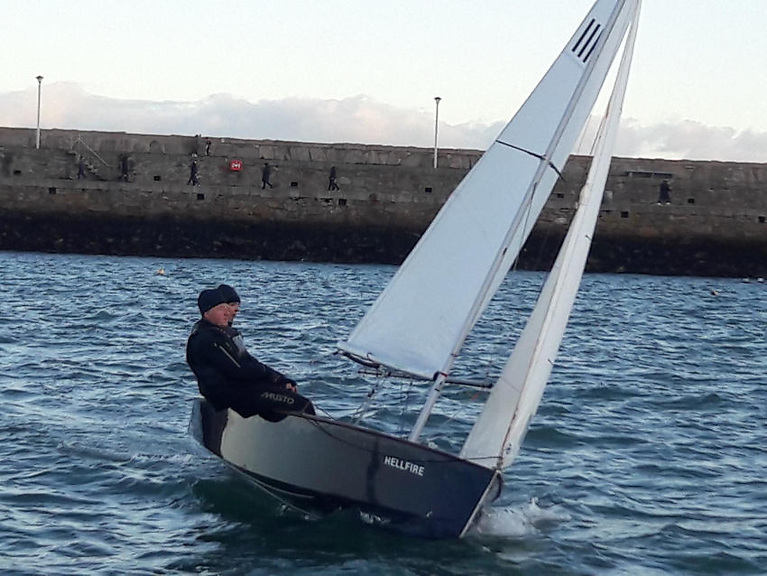 A record 69 boats were on the water for the fifth round of the Viking Marine sponsored Frostbites hosted by DMYC in Dun Laoghaire harbor on Sunday December 5th, beating the attendance with one on opening day of the 7th November.

Mother Nature decided she would follow the forecast for the weekend and Dun Laoghaire was bathed in winter sun and a NNW breeze of around 10 to 13 knots (show of hands) at 11:30 am. The projection was for the breeze to drop as the afternoon progressed and that’s what it turned out.

An inaugural New York match-racing event (report here) was taking place in the area immediately inside the harbor mouth, so the Frostbite racing area was located a little closer to the coast, but still allowed to define an Olympic course of three laps. The NNW breeze was reasonably stable in the direction and allowed a weather mark to be established about 150 m inside the end of the west jetty, downwind of the green INSS platform. A jibe mark was placed downwind of the entrance to the marina, with a leeward mark located at the approximate location of the Boyd Memorial on the east pier.

All three starts escaped on first demand and most fleets seemed to favor a team on the left side of the course before heading upwind to the weather mark.

In the PY class, the Fireballs took the lead on the water at an early stage with Frank Miller and Ed Butler (14713) leading the charge. (see Fireball report here) They were squeezed by Alistair Court and Gordon Syme (14706) for the majority of runs with Neil Colin and Marjo (14775) hovering within striking distance and closing in on the paid front as they went as the race progressed. In the end, their persistence paid off when Court & Syme crossed the finish line. However, at corrected time, the Aero 7s dominated the podium with a brendan Foley, Mark Gavin and Noel Butler brace. Miller & Butler finished fifth in time, followed by the two Aero 5s of Roy van Mannen and Sarah Dwyer. The IDRA of Pierre Long & fils took 8th place, followed by the Fireballs of Colin, Court and Louise Mc Kenna & Joe O’Reilly (15016) David Mulvin & Ronan Beirne (14069) won the duel of the GP 14 at the 12th place, the Wayfarer came home in 16th place and the Kona Windsurfers stayed close most of the time, Des Gibney taking the decision over Robert Walker in 21st and 22nd respectively.

In ILCA 7s, there was a change in the normal course of things when Kei Walker took the weapon ahead of Gavan Murphy and Owen Laverty, meaning Chris Arrowsmith had to settle for fourth place. In the ILCA 4s that share the start with the ILCA 7s, two young women stepped onto the podium with Donal Walsh sandwiched between them – 1st place going to Emily Cantwell and 33rd to Zoe Hall.

In the ILCA 6, the order of arrival was Luke Turvey, Alana Coakley, Mark Henry, Brendan Hughes and Conor Clancy. This represents a bit of a misstep from young Hughes, who normally registers much smaller numbers on his final scoreboard.

As the first race progressed it became evident that the wind force was starting to decrease as expected, but also that the direction was heading further west. As the race committee team finished the first race, the Race Officer reset the weather mark by moving it around 75 m further towards the coast so that it now floats on the coastal side of the platform. green form of the INSS. Another three-lap Olympic course has been reported.

Once again, all three starts went well and in the PY class the Fireballs were joined at the head of the fleet by Noel Butler’s Aero 7. However, in the lighter breeze which was in the range of 7-10 knots, the Fireballs struggled to save time and Butler led home another podium dominated by Aero 7 in corrected time followed by Gavin & Foley . Long’s IDRA, Schaefer’s Wayfarer and Mulvin’s GP14 all finished ahead of Miller & Butler’s first Fireball, followed by Court & Syme.

In ILCA 7s, a more normal finishing order was restored when Murphy took Chris Arrowsmith and Owen Laverty home – the â€œmore normalâ€ benchmark being in terms of names, no finishing sequence! In the ILCA 4, the young ladies came in with a brace at Zoe Hall and Emily Cantwell respectively, while Brian Carroll closed the podium.
In the ILCA 6s, Brendan Hughes resumed his normal occupation of the top step of the podium, followed by another regular finisher, Luke Turvey, with Conor Clancy, Archie Daly and Mark Henry closing the top five.

So, to conclude, the biggest crowd of Frostbites 2021/22, a sunny winter Sunday, two Olympic courses as big as possible in the port and everyone finished on time. What more could you want?

With seven races completed over five weekends – one Sunday was called off and another Sunday had a lone race, the overall picture is this;

There will be two more racing Sundays before the Christmas holidays.