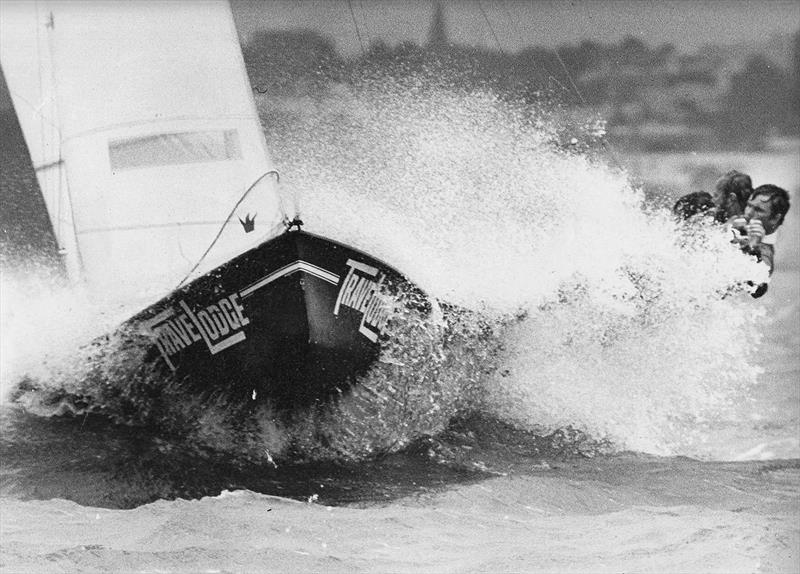 Travelodge at the 1977 World Championships in Auckland Â© Archive

Few knowledgeable sailors would question the view that the modern or 1950s 18-footer is one of the most demanding boats in the world for racing. So how does a 69 year old man manage to skip one of the modern 18s every Sunday for 36 seasons and a historic 18 every Saturday since 2001?

Just ask John ‘Woody’ Winning and he might be able to explain to you, but you better not take too much of his time as he is currently preparing a brand new single scull for the upcoming modern 2021-22 season at the Australian 18 Footers League, of which he has been President since 2003.

And if you think ‘Woody’ might just be an older man to make up the numbers, then forget it. The Yandoo team of John Winning, Mike Kennedy and Fang Warren was in the rhythm throughout the 2020-21 season. The team even finished second behind championship winner Smeg in race four of the 2021 JJ Giltinan Championship, and placed 9th in the regatta.

Earlier in the season, Team Yandoo also won the club’s 2020 Spring Championship over seven races in Sydney Harbor, finished fifth in NSW and seventh in the Australian Championships, and won the club’s score for season, based on the results of each club race. during the season.

It is not surprising that ‘Woody’ has a great love for sailing. He was born into a hugely prosperous sailing family who already had a record which included an Australian Championship victory in the 18s.

His father, also named John, and his uncle Dick Winning were a champion 12ft single scull team in the 1940s and in 1947 were selected by Queensland skipper Bill Stanley to join his Australian crew for the championship Australian 1946-47, which the team won.

John started his career in Sabot at the Vaucluse Amateur 12ft Sailing Club, then moved on to VJ, Flying Eleven, Flying Ant and VS before joining the 12ft Skiffs, where he won the 1971-72 Australian Championship and 1974- 75 Inter-Dominion Championship. This latest victory was in a single scull sponsored by the Travelodge motel company.

Alan Greenway, who was President and CEO of Travelodge, was building an international chain of motels at the time and viewed the 18ft Skiffs as a great vehicle to promote his business. He had previously won the Giltinan World Championship with Bob Holmes as skipper and saw John Winning as the perfect replacement when Holmes retired.

John’s long career in the 18s began in the 1975-76 season, but it was divided into two specific periods. The first part of his career was successful, but came head-to-head with the careers of Iain Murray and the incredibly successful Color 7 team.

Greenway continued to sponsor John as Travelodge in 1976-77, then moved to Pacific Harbor Fiji, which was the name of a new resort the company had created as part of its international expansion.

Under the sponsor name of Pacific Harbor, John was a finalist for Team Color 7 at the 1979-80 Australian Championship, Perth, and the 1980 Giltinan World Championship, Auckland. It was the start of a very unlucky race.

Over the next two seasons, 1980-81 and 1981-82, John had to settle for being a finalist for Team Color 7. Unsponsored, he finished behind Color 7 at the World Championships in Australia and Giltinan. in Yandoo, then finalist behind the same team at the 1981-82 national championships in the Mitchell Cotts sponsored by Patrick Corrigan.

The first leg of John’s 18-foot career came to an end after the 1985-86 season when he took time off to look after his commitments in the family business as well as a young family; wife Kerrie, and newborn children John Jr and Jamie.

As the kids got involved in their own sport (John rode a 29 inch) and Jamie (horseback riding), John got the virus back in his 18s in 1995 and finally got the award he so deserved afterwards. what had happened in the three seasons between 1979 and 1982.

Sailing on self-sponsored Yandoo skiffs since 2003-04, John was consistently in the top five of the top ten at the annual Giltinan World Championship regattas and has always been in the top half of the fleet.

With a brand new Yandoo skiff ready for the 2021-22 season and the same skillful team of Mike and Fang, ‘Woody’ is still excited to get back on the water. “This is shaping up to be a great season for the club. There are new boats and new teams up for the challenge and our team are confident that we can be competitive at all levels.”

â€œLast season we won the coveted Season Point Score, which is contested in every race. It clearly shows how competitive we are in all conditions and we aim to come back twice in a row and win it again. in 21-22. ”

The new season of the Australian 18 Footer League kicks off on Sunday 10 October.