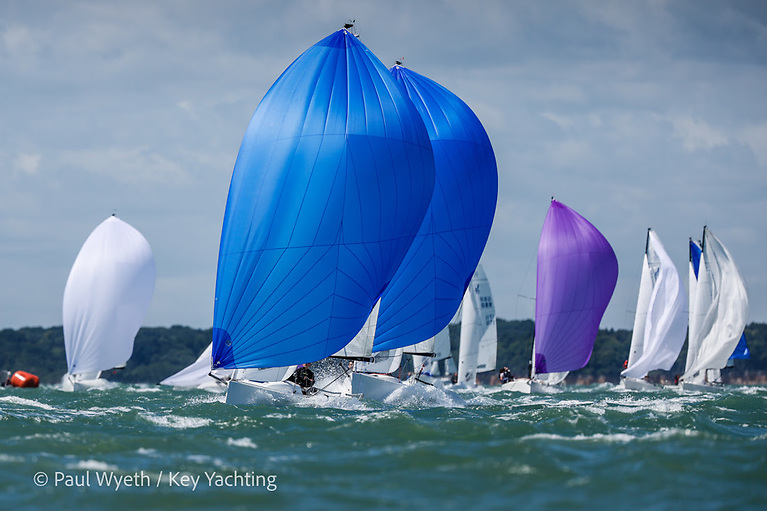 The Key Yachting J-Cup, in association with B&G, benefited from superb conditions for the second day of racing. Bright sunshine with a breeze from the southwest, pumping up to over 20 knots, produced stunning planing conditions for the 56 J/Boats. Hundreds of sailors were smiling from ear to ear after a ballistic day on the Solent, three races were completed in all classes.

“When you add 20-25 knots of wind with a fleet of 27 J/70s, managed by a terrific race director and team, who set the perfect courses and start lines, you’re in for a spectacular day”, commented Martin de Jelvis. Bump. “Normal J/70 racing is sick, today was super sick. Given the strong wind, boat handling was paramount and Ruby (Dent) and Wetherell Brothers; Jack and Henry did a great job.

Doug Struth’s DSP enjoyed another one-day win, scoring 5-3-2 to retain third place in the Open Division. DSP leads the 19-strong Corinthian Division by an impressive margin of 18 points. In the Open Division, DSP is one point ahead of 2021 Open J/70 National Champion Nick Phillips’ Chaotic, as well as two points over Charles Thompson’s Brutus and Simon Patterson’s Standfast. Tim Dickinson’s Jellyfish, with his son Fin at the helm, move up to second in the Corinthian Division, three points ahead of Marshall King’s Jon Calascione and Calypso.

Jukebox and Just So, competing in the fleet of 12 J109 boats Photo: Paul Wyeth

The Dutch J/109 Joule comes from Jachtclub Scheveningen on the North Sea. The team is entirely Dutch and after the Key Yachting J-Cup, the boat will stay to participate in the week of Cowes. “We enjoy one-design racing, but at home we’re lucky if we have six J/109s racing together, so it’s great to race in such a big fleet,” commented Joule’s Arjen van Leeuwen. “We were surprised at the speed advantage we had today, but the crew also sailed very well. We made a mistake with the spinnaker, but we were ahead enough to win the race anyway. The goal now is to skip the pub, go to bed early and sail tomorrow too. After that, you’ll see us on the dance floor!”

Kevin Taylor’s J/99 Jump 2 scored a third and a win, but a retirement in the final race, due to a block failure, nearly cost the Jump 2 the class lead. The J/122 Jahmali of Michael & Sarah Wallis reveled in the big breeze by taking two race victories to climb to second place in its class. Derek Shakespeare’s J/122 Bulldog scored a 2-2-4 to end the day in third place in the regatta.

Half the crew of the J/105 Jacana are members of the Royal Southern Yacht Club and skipper Mark Stevens has competed in many J-Cups in many different classes. “It was absolutely brilliant sailing today, one of the best in a long time, we had a good breeze and good courses,” commented Mark Stevens. “There is a lot of racing history between the boats in our class; we’ve been racing against each other for a long time, so it’s great to do so well! The best we’ve done in the J-Cup is third, so we’re really going for it this year.

The Key Yachting Daily Awards at the RORC Cowes Clubhouse was a very happy affair with sailors smiling from ear to ear after a great day of racing. Key Yachting’s Wayne Palmer and Hannah Le Provost greet the winners on stage to receive a host of prizes from regatta sponsors.

The Key Yachting J-Cup races conclude tomorrow July 2 with three more races to complete the regatta. For more information on the J/Boats range. Visit Key Yachting, the exclusive agent for J/Boats in the UK and Ireland for over twenty years. www.keyyachting.com

Boat captains, deckhands and others take precautions due to high temperatures