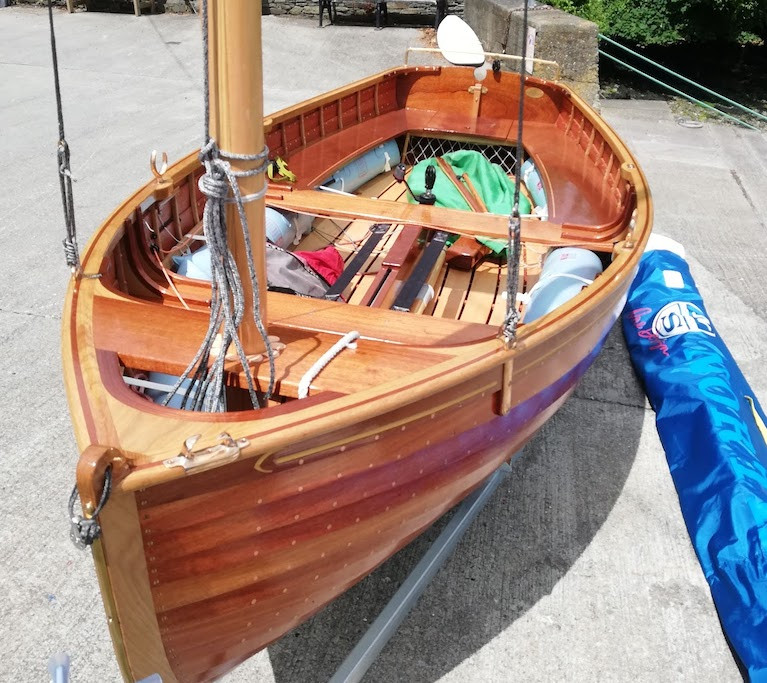 As the 12-foot international class prepares to celebrate the tenth anniversary of its relaunched championships next week in Dun Laoghaire harbor, the historic dinghy class also welcomes a new arrival.

A new 12 built in clinker was recently completed by Rui Ferreira of Ballydehob in West Cork.

This class was designed in 1913 by George Cockshott as Class A of the British Racing Association. The class was adopted by the International Yacht Racing Union on the 1st. January 1920 and so it became the 12 foot international class. The class was the only dinghy class to compete at the 1920 Antwerp Olympics (Belgium) in Ostend.

New Build 12 on the slipway in West Cork

As Afloat previously reported, the class gained popularity in Ireland in the 1920s and 1930s with fleets of professional and amateur-built boats in Baltimore, Clontarf, Crosshaven, Howth, Malahide, Sutton and Seapoint (Monkstown, Co . Dublin).

Today there are many 12ft dinghies in Ireland, some of which have been in the same families for many years. Some are unused and located in barns while others are used as yacht tenders. We have a member interested in restoring an international 12ft dinghy, so if you have one that needs to be restored let us know.

The 10th anniversary of this relaunched 12 Foot Dinghy Historic Prize Championship will take place at the Royal St George Yacht Club, Dun Laoghaire on Sunday 13 September, during which modified Dublin Bay 12 Foot Dinghies with mainsail and jib will sail against the ‘International 12 foot sailing dinghies with just one mainsail on a par.

A little piece of yachting history: At the 1920 Olympics in Ostend, the organizers didn’t know the difference between a 12ft dinghy and a 12m yacht, so they put both classes on the same course. After a race, the dinghy competitors went on strike and refused to race the 25 mile long racetrack. This caused such chaos within the organizing committee that it was several months later before the second Olympic dinghy race which took place in another country, the Netherlands.

The organizers would like to hear from all the Irish owners of 12 Footers.

The MRDC donates new canoes to the villagers of Rearea