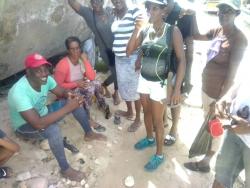 Seven fishermen lost at sea for more than a week were reunited with families in Whitehouse, Westmoreland, yesterday after being rescued by a sailor who refused to abandon his rescue mission.

What was supposed to be an uneventful three-day trip to the Pedro Cays turned out to be a nightmare for seasoned anglers Wilton Swaby, Patrick Gooden, Ricardo Samuels, Ian Wright, Clive Tomlinson, Eyverth Blair and Alvin Blair.

“God only knows… A joy right in my heart. One of the engines fails on Saturday around 3:00 p.m., and the other fails on Sunday around 1:30 p.m., and then that’s it. We start just to drift,” recalls Swaby, the hapless boat captain, as family members hug him and express their relief that he survived the ordeal.

“At that time, stop thinking about the land and focus on the seas, and keep praying that they find wi. A jus Dieu, my boss… . A bawl just a bawl to see my family this morning,” Swaby added, as he stood on Whitehouse beach with his back to the sea.

With food rations running out, the seven fishermen saw something they had been waiting for since they were adrift: a boat heading their way.

Oniel Jones, captain of the salvage ship, said he sailed “about 150 miles out to sea” on his ship, Lady Felicia.

“I just decided to follow another course, because at that time it was time to go back to earth. I then began to search the waters desperately because my only intention was to find my friends,” Jones said.

Recounting their ordeal, Gooden said they had enough food to last until Sunday, when they planned to return home.

“In the first two days we had hope, but when we see Tuesday and Wednesday coming and nobody saves us, everything starts flashing in my head,” Gooden said. “…And after seven days and the food is over, we start to worry.”

He said that when he saw Jones’ boat arrive, “it was like God was coming.”

Amid the celebrations, Delroy Burnett, a veteran fisherman in the community, recounted the gleaner that the latest alert was a warning to all sailors to ensure they are properly equipped.

“I’m so glad to know they’re back home because things could have been worse,” Burnett said.

The Kitchen Maker-Caesarstone looks set for a big season