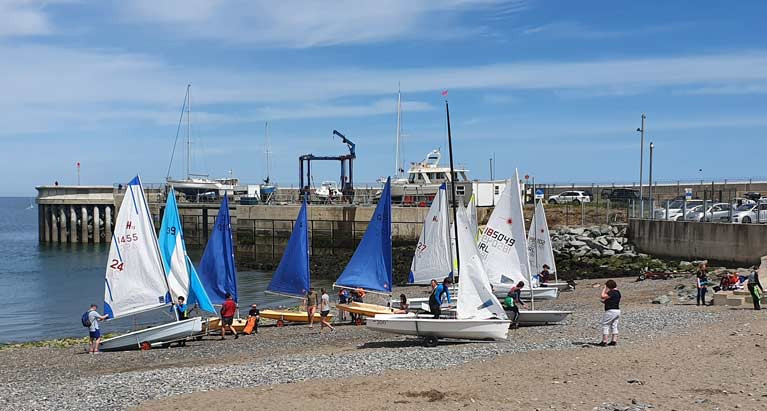 Taking advantage of the good weather and the lifting of restrictions, Greystones Sailing Club launched a fleet of 37 dinghies last Saturday, with a further 18 out last night (Thursday). This was the second week of a club-run race training program for single-handed and double-handed sailors from the same family.

The usual fleet of RS 400s, 200s and Fevas have been bolstered by an explosive fleet of Lasers recently added to the club, not to mention a number of adults who have stepped into the Laser Picos club fleet as the only option for sailing under the current Irish shipping notice.

A fleet of RS 400s, 200s and Fevas have been reinforced with a new fleet of lasers at Greystones Harbor

Managing what she described as the club’s commodore “quite a logistical challenge”, Daphne Hoolahan patrolled the beach to ensure all attendees were logged on and off to comply with contact tracing requirements. The fleet took part in a series of practice starts and sprint races.

Coaches organizer Fiachra Etchingham was delighted with the outcome. “As Saturday progressed you could see a significant improvement in our sailors who had had a longer than usual off season,” he commented. “The current restrictions have forced us to do something we do so little, train for our sport!”

The training program will continue in the coming weeks with North Sails Shane Hughes lined up for a master class in due course.