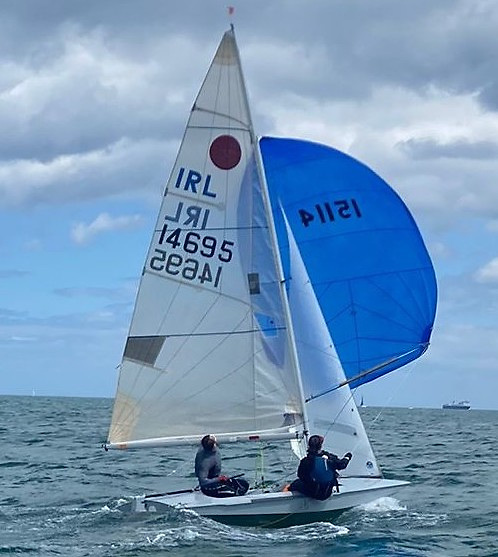 After the Covid-enforced break, the first one-day regatta hosted by a Dun Laoghaire Harbor yacht club in four years took place last Saturday, with the Dun Laoghaire Motor Yacht Club ‘breaking the ice’ for the other three clubs.

Despite good sunshine throughout the day, the forecast wind was not so mild and a South-West at 15 knots with gusts of 23/24 knots was “on the agenda” from the beginning of the previous week. Indeed, on the morning of the regatta, the three Race Officers, Susanne McGarry (DBSC Hut), Barry O’Neil (Green Fleet), Cormac Bradley (Dinghy Fleet) and the regatta coordinator, Ben Mulligan, considered an hour postponed in the hope that the forecast and apparent breeze might die down. This was not the case and the Race Officers and their RIB entourages set about ensuring the day’s race. Dinghies, including Fireballs (5), Eros (4) and ILCA 6 (5) made up about half of the starting roster with Squibs and Mermaids absent and no other ILCAs coming to play.

The dinghy course was launched off Salthill near the Green Fleet coast and well west of the DBSC Hut Fleet which first launched west before taking off on a leg of spinnaker to the east. While a handheld recorded steady wind speeds of 15-17 knots, the numbers steadily increased to register gusts in the twenties and their arrival was heralded by darker clouds passing overhead. A postponement was made to give dinghy participants more time to get to the racing area, but even those who did decided there was too much “punch” on the water and the brought home almost as soon as they arrived.

Racing in winds in the 20s can be pretty tough, but add multiple speed breakdowns and the day goes from potentially daunting to downright frustrating. A well-known Fireballer suffered a broken mainsail halyard before the start of the race. After taking some time to fix this and show up at the start line, he would suffer from a broken spinnaker sheet and a jagged mainsail sheet, proving that even multiple dice rolls by an experienced hand can still produce.

The five-boat Fireball fleet saw both races won by Josh Porter and Cara McDowell (14695), although they had a slice of luck in the second race when the boat leading to the last leeward mark capsized, which gave them the victory. Adrian Lee (14713) took second place ahead of Frank Miller & Neil Cramer (14915). On a day when standing was paramount, the level of competition within the fleet was modest and trading tacks on the course was not a paramount activity. However, Porter & McDowell showed what a light crew can do on an intense day and looked very comfortable both upwind and downwind. Spinnakers were thrown in both races but not on both reaches of either race.

Hugh Cahill (216594) also scored a pair of aces in the ILCA6 fleet which also had five boats in the race. Hugh was well placed in the first race, but not in the lead, when the lead boat went swimming, allowing Hugh to take the first gun. In race two, he didn’t have to rely on others making mistakes to cross the line first. Overall, he was followed by Damien Delap (183295) and Michael Norman (219126).

The Aero fleet included 3 Aero 7s and an Aero 5, the latter piloted by Roy van Maanen. This added a bit of intrigue to their race as it meant there was a handicap race going on within their fleet. Stephen Oram reported that they enjoyed the tight race thanks to the lighter van Maanen in the smaller rig being competitive against the “larger helms” sailing the Aero 7. Three of the four Eros enjoyed the relatively tight race , the fourth boat being out of rhythm . Brendan Foley won the regatta in the Aero 7, followed by Roy van Maanen (Aero 5) and Stephen Oram (Aero 7).

With two races in the bag and a recent gust of 26 knots recorded on the handheld and given that the green fleet had closed up shop for the day, the dinghies were sent to port where the day’s proceedings were assessed under an afternoon of blue sky. .