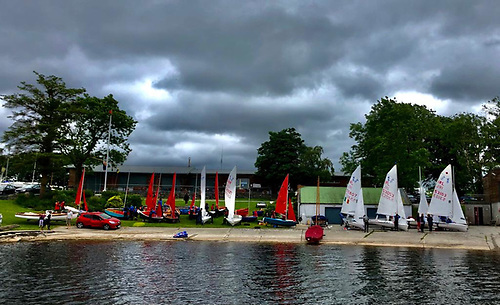 Double dinghies are back at Lough Ree Yacht Club

This weekend saw the eagerly awaited return to racing for two fleets of young sails; the Mirror & 420 fleets. This joint event held at the Lough Ree Yacht Club was a Mirror Regional Championship and 420 Warm Up Regatta.

The first regional 420 is scheduled for the 26th and 27th of this month at the Waterford Harbor Sailing Club, giving time to Leaving Cert sailors.

Nineteen boats competed, ten Mirrors and nine 420s and the conditions were sublime! The Saturday breeze was cool at times, allowing the 420 to hover upwind. Sailing on a swell-free lake offers dinghy sailors a different experience however when light conditions prevail local knowledge can be helpful! Racing officer Garrett Leech competed in 6 races over the weekend.

In the Mirror fleet, the championship was dominated by the Sligo Sister & Brother team, Jessica & Mark Greer who got balls in 5 of the 6 races. Second place overall went to Sligo Sailors, Mia Canham and William Draper, and third place overall went to Blessington Sailors; Jack McNaughton and Saoirse Lawley. Well done to the local sailors (and to the first race!); Mathew Turner and Donnacha Dullea, who finished fourth overall and first in the bronze fleet.

In the 420s the Warm Up regatta was dominated by Jack McDowell (Malahide Yacht Club) & Harry Thompson (Wexford Harbor Boat & Tennis Club), who like their Mirror counterparts won 5 balls out of 6 races. The second and third places in the general classification went to the local duos; Eoghan Duffy & Luke Johnston and Alex Leech & Conor Paul, respectively.

Two of the 420 competing teams will travel to the Yacht Club Sanremo in Italy for the 420 World Championship, which starts in early July and will last for nearly two weeks. These teams are McDowell / Thompson & Hauer / Micka.