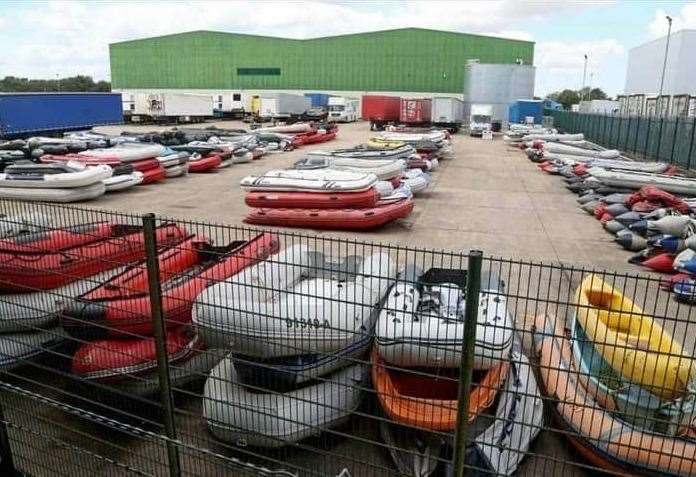 The MP for Dover is calling for abandoned migrant canoes to be donated to good maritime causes after hundreds of them were photographed stored in a warehouse.

Natalie Elphicke has written to the Home Office to seek clarification on what happens to the boats once recovered from the English Channel.

After storage in a warehouse on Palmerstone Road in Whitfield, she had believed that many, if not all, had been destroyed.

The Immigration Department has since admitted to KentOnline that if some are destroyed, such as those that are not seaworthy, others are auctioned off – with the profits going to public funds.

Once the criminal proceedings are completed, some of the seized vessels are also returned to their rightful owners in cases where they have been stolen for use in the crossing.

But Ms Elphicke is still awaiting a response to her letter and wants to see if the ships could be used locally by groups such as Walmer RNLI and the Sea Scouts.

She said: “Voters have suggested to me that the boats be turned over to the RNLI or some other charity, when no longer needed as proof, then refurbished and auctioned off for fundraising. local charity or donated to Sea Scouts or Scouts.

“I recently wrote to the Home Office regarding the disposal of the boats and asked them to consider whether the boats and engines can be safely preserved and restored rather than destroyed.”

It was revealed this week that the rubber dinghies used by migrants to cross the Channel are being stored ashore off Palmerstone Road in Whitfield.

The Home Office is not disclosing exactly how many are stored at the facility, which is located about five miles from the Dover Quay.

But in the photos they are stacked up to three high and in several rows.

It comes after 2,800 migrants have reached the UK so far this year, prompting Home Secretary Priti Patel to warn that the illegal activity “cannot continue”.

Last week she visited France and reportedly struck a deal with the country to crack down on migrants arriving in the UK.

Immigration and Courts Compliance Minister Chris Philp said: â€œThese crossings are illegally facilitated and no one should attempt them in the first place.

â€œThe French have arrested thousands of migrants this year and those who arrive in the UK via this route are being sent back.

“But we are pressing the French government to take more stringent enforcement measures, including interceptions at sea and direct returns of boats.

â€œWe are also taking measures to prevent boats from launching, including by creating a joint intelligence unit, to prosecute criminals behind these crossings.

â€œThis year 22 smugglers were jailed and earlier this week our investigations resulted in 10 more arrests. “

Read more: All the latest news from Dover

“Not the Worlds” will be sailed to Auckland in August