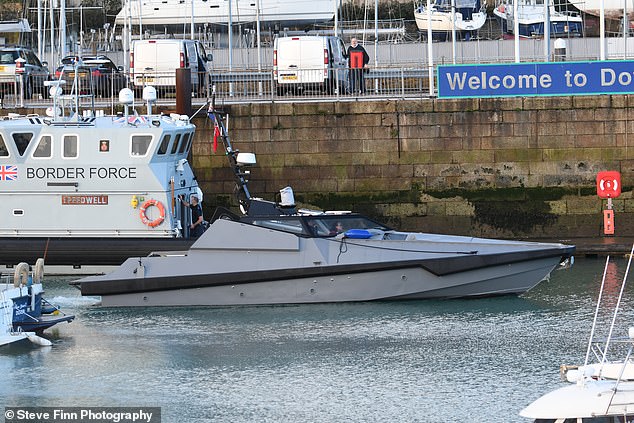 Bond Boat on a migrant mission: 007 style super-ship that could be used to spot dinghies crossing the English Channel is put to the test in Dover

By David Barrett Home Affairs Correspondent for the Daily Mail

James Bond would not look out of place in the speedboat tested by the Royal Navy at Dover yesterday.

But rather than catching supervillains, this sleek vessel could be used to spot migrants crossing the Channel.

The 39-foot gray and black craft named Madfox is fitted with high-tech surveillance equipment and has a top speed of over 40 knots.

Designed to operate without a pilot, it was developed by the Defense Science and Technology Laboratory and the American company L3Harris ASV.

The ship was inspected by the Home Office’s Underground Channel Threat Commander Dan O’Mahoney after arriving from the Solent.

He said: â€œWe are working day and night to secure our borders and stop small boats crossing the Channel.

“This new technology could help us in our mission to make these crossings unsustainable by gathering evidence for prosecution, preventing uncontrolled landings and supporting operations to save lives at sea.”

Nearly 9,000 men, women and children have left the Calais region this year despite the fact that Interior Minister Priti Patel has pledged to stem the tide.

Busy time ahead for the Noakesailing team