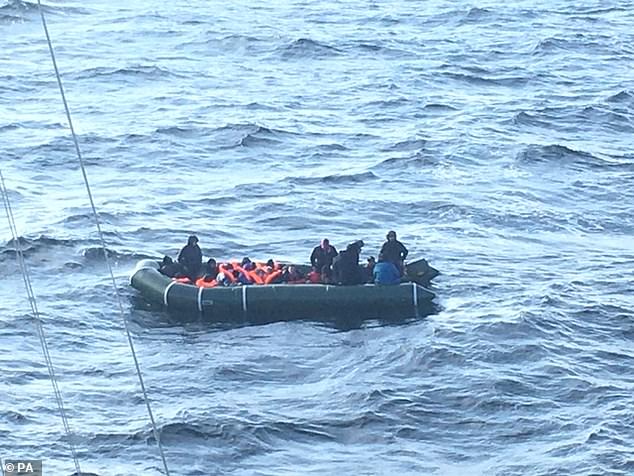 Afghan criminal gang deflate and bury rubber dinghies on French beaches before charging migrants Â£ 2,000 each to use them on their way to the UK

By James Gant For Mailonline

An Afghan criminal gang deflated and buried rubber dinghies on French beaches before charging migrants Â£ 2,000 each to travel to the UK.

A suspected network allegedly bought the used boats online and then hid them near Calais.

It comes as 10 children were rescued in the English Channel after spending several hours trying to reach the UK.

They were among 33 people aboard an 8-meter boat as French authorities revealed they had intercepted at least 61 people trying to make the dangerous crossing on Tuesday.

A suspected network allegedly bought the used boats online and then hid them near Calais. Pictured: migrants today

French police rushed to the suspected criminal gang and arrested 10 people in the Yvelines region of France, west of Paris.

Eight have been charged following an investigation into the network, it was announced Tuesday.

At least 115 people made it to UK shores on Monday, the highest daily figure for 2021 to date.

The arrests in France follow months of investigation into what the UK’s National Crime Agency has called an Afghan criminal gang involved in the Channel crossings.

Each boat could carry between 10 and 15 migrants, who would be charged between 2,500 and 3,000 euros each to get to the UK, officials said. Pictured: migrants today

Agents of the ANC and the French illegal immigration unit Ocriest, working together as part of the Anglo-French Common Intelligence Unit (JIC), opened an investigation into the network in November.

Members of the suspected gang were placed under surveillance and agencies on both sides of the Channel worked to link the group to boats arriving in the UK.

Eight people have been indicted by a French magistrate for facilitating illegal immigration, the ANC announced on Tuesday.

The group is suspected of having been involved in at least six attempts to cross the Channel, three of which were foiled by French authorities.

At least 115 people made it to UK shores on Monday, the highest daily figure for 2021 to date. Pictured: The Channel Today

Miles Bonfield, NCA’s Head of Immigration Organized Crime Operations, said: â€œOperations like these demonstrate the benefits of working closely with our French counterparts.

â€œThese networks of smugglers are insensitive and do not care about the safety of the people they transport, putting them in small canoes unsuitable for this type of crossing.

“By working with our law enforcement partners in France and elsewhere, we are determined to do everything possible to disrupt and dismantle these networks, which put lives at risk.”