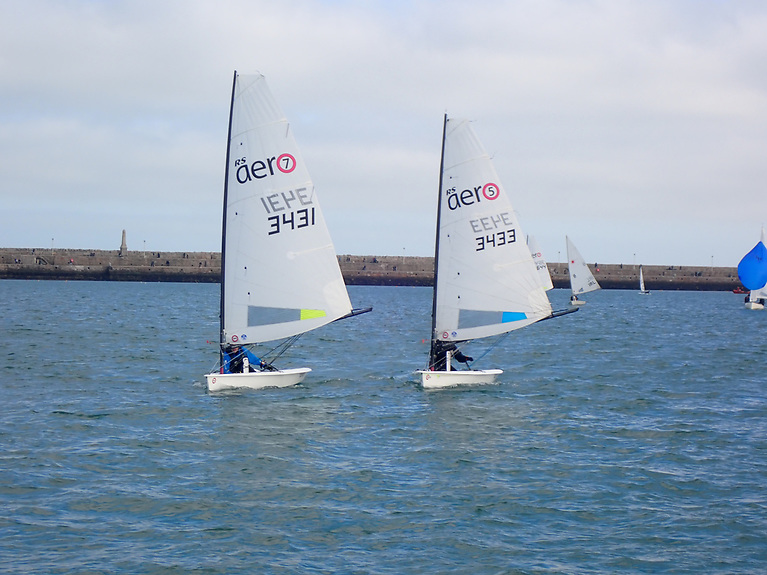 While thirty-five boats had taken part in the additional DMYC ‘Snakes Alive’ mini dinghy regatta, a slightly smaller number actually appeared on the water in Dun Laoghaire Harbour. Of the twenty-five boats that raced, the top score goes to ILCA 4 who had 100% attendance out of the four boats entered – well done to Zoe Hall, Ava Ennis, Dylan de Vreeze and Lucy Nicol who not only participated but contested all three races.

The next best were the ILCA 7s which had a full suite of three boats, with three finishers in the first race, two in the second and none in the last race, as the remaining ILCA 7 offered to start with the PY fleet – thank you Brian!

The ILCA 6 had fourteen boats registered and eight took part in the first race and seven in the other two. The PY have also promised fourteen boats, eight of which will respond to the starter’s call.

However, the number of boats that appeared was academic as there was a very favorable reaction from everyone who made it to the water.

With a constant wind of 150° all afternoon, the heading did not require any adjustment as to the location of the buoy, using the maximum dimension of the port where it was located east of the kiosk at music, with the committee boat in the bend of the west buoy. breakwater and the west pier. For the first two triangular courses, the gybe mark was placed inside the end of the east pier.

The final race was a two lap shorter race to windward, which meant the jibe mark became the second half of the leeward gate.

The wind was strongest in the early afternoon, with the base wind fluctuating around 15-17 knots but during the first race 21 knots were recorded on a portable device. This gave the fleet a quick lap of port and Frank Miller & Neil Cramer (FB 14713) took advantage of the conditions to head home with a very comfortable margin in Race 1. However, on corrected time they lost against the GP14 of Ciara Mulvey and Peter Murphy. ILCA 7 youngster Conrad Vandlik continued where he has been for much of the season, on pole position.

The ILCA 4s were superb with close racing all afternoon between Zoe Hall and Ava Ennis, but in the windier conditions their willingness and competitiveness to move around the course was fantastic. These two young women are small, but neither has yielded to the conditions. Zoe won the first race, but Ava won the second.

In the ILCA 6, only three boats finished the first race with Marco Sorgassi in the spotlight, but the number increased for races two and three.

As the afternoon progressed, the wind died down and the last race of the day was at 8 – 10 knots. Although the ILCAs “enjoyed” a long practice session on the water before the races started, they also seemed to enjoy having three races. There were many more with smiles on their faces as the afternoon ended.

The regular Frostbites return tomorrow (Sunday) for the penultimate round of racing. The current forecast (4:30 p.m., Saturday) announces 13 – 17 knots from the South-East with sunshine and a temperature of 9°. See you on the water!

On the water: boats and risks