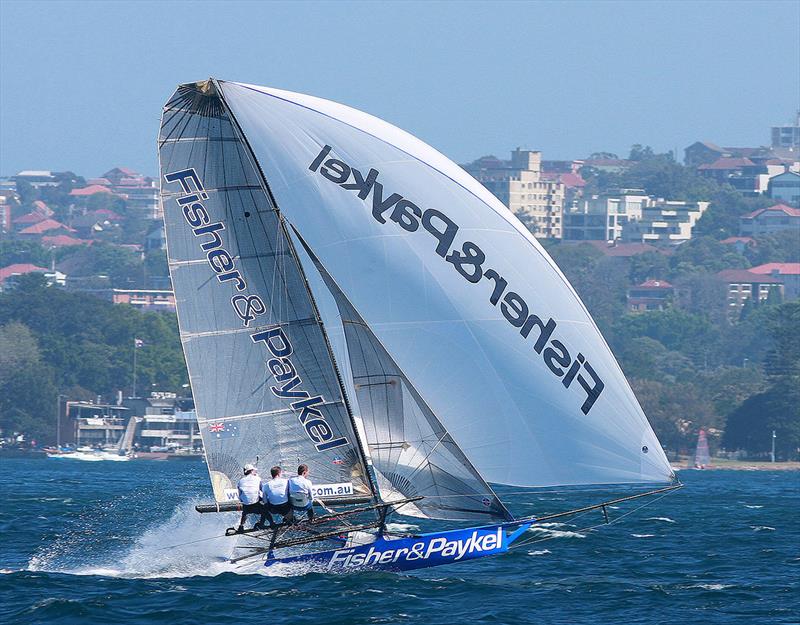 
Over the years the Australian 18ft League has had a number of wonderful relationships with many of its sponsorship support companies and their individual owners and representatives, and the recent 2021-22 season produced the latest situation when the Fisher & Paykel company started again. an 18-foot Skiff sponsorship he previously had for ten years.

This time it also produced a “unique situation” as well as a successful season for the racing team.

Over the course of ten seasons, the Fisher & Paykel name has featured prominently in Sydney Harbor as a boat sponsor in the Australian League’s 18ft Skiff 18ft fleet, having first appeared on Andrew Cuddihy’s skiff sails in the 2005–06 season and remained in the fleet. , across a number of different single sculls and teams, until the end of the 2014–15 season.

The highlight came at the 2010 JJ Giltinan World Championship when Trevor Barnabas, a late replacement for the team’s regular skipper, won Race 3 of the regatta and gave the team a solid 10th place overall in a very solid fleet of 32 boats from five countries. .

The Fisher & Paykel name returned to the League’s Sydney Harbor fleet in the 2021-22 season, this time in a skiff skippered by Jordan Girdis.

Girdis initially brought his two regular crew members with him to the new squad, but suffered a critical setback and had to make late changes just before the start of the season when his two crew members had to retire in due to injury and interstate university studies.

It was a critical setback for Jordan in such a pressured fleet, but the team’s performance was consistently strong throughout the season. After finishing 5th in the NSW Championship, the Fisher & Paykel team finished eleven at the Nationals and then a strong 8th place at the JJ Giltinan World Championship at 25 in March.

Fisher & Paykel, which is a premium home appliance brand from New Zealand, has been closely involved in sailing for many years, so it’s no surprise that it’s been back in the 18s. The most memorable involvement being the 1989-90 Whitbread Round the World Race in which the Fisher & Paykel NZ 82′ Farr campaign, skippered by Grant Dalton, finished second.

As Richard Searle, National Key Account Manager at Fisher & Paykel, points out, “Premium appliance solutions with a focus on cutting-edge innovation and sustainability, a consideration at all levels, are the cornerstones of the Fisher & Paykel brand, which couldn’t be closer to the world of 18ft racing.”

Mr Searle is the enthusiastic ‘face’ of the Fisher & Paykel company on League racing days and is a regular on board the club’s spectator ferry to watch his team compete.

Asked why the company came back in 18 years, Richard said: “It all started with an invitation to jump on Yandoo with ‘Woody’ (John Winning) after a run in the 2020-21 season. There had a reasonable breeze and naturally it was an amazing and unforgettable experience.”

“I’m heavily involved with Fisher & Paykel’s Winning Group, so when ‘Herman’ (John Winning Jr) asked to sponsor an 18 a few months later, it was an easy decision.”

“Jordan faced an unfair share of crew injuries and Covid issues throughout the 2021-22 campaign but still managed to produce some great results.

For Richard, the 18 foot experience is more than just sponsorship. “I’ve been sailing since I was 7, so personally it’s almost a dream come true. I remember seeing the 18 year olds in sailing magazines, and sometimes on TV, thinking it’s was amazing and a bit crazy.At the time, cruising on a Mirror over the beautiful harbor of Salcombe and the flooded gravel pits of Yorkshire, it seemed like a million miles.I still can’t believe it.

“It’s also great to see so many sailors from my local club, Cronulla, gracing the fleet.”

What makes the “situation unique” mentioned earlier is the additional involvement of Richard’s daughter, Jenna. As Richard proudly says, “Jenna now works on Jess Crisp’s team on Sundays with Lara Quigley, updating live social media feeds during the 18ft run; Instagram and Twitter. Part of the job is to helping with post and pre-race interviews, which she loves. What up-and-coming sailor wouldn’t love to rub shoulders with the best?

“Jenna has been sailing since she was six. Her brother Jeremy was on Neil Tasker’s crew at the Cronulla Sailing Club and I was in the lifeboat with Jenna. Most Sundays she was jumping with Bryce Edwards on his NS14 sailing to the start line and then after the race back to the club.”

“Her first crew gig was at age seven in Flying 11, competing in her first Nationals that year. She then sailed O’pen Bics, J24, MG14. She is now under the team’s tutelage of Nev Wittey at the Royal Sydney Yacht Squadron Youth Development Team, match racing on Elliots.”

Naturally, a promising young sailor will take advantage of any opportunity to sail an 18 in Sydney Harbor and Jenna didn’t miss her opportunity. Richard recalls: “On the first practice sail of the year, Jenna found herself on the F&P with Jordan. Within 10 minutes she had the helm on a kite run to the deck. I was very proud and extremely jealous at the same time.”

“Her highlight of sailing is to be the harbor race queen this year.”

Then on the last race day of the 2021-22 season, after the Queen of the Harbor race, Richard got his turn. “Jordan asked me to jump too…five out of an 18? A bit cramped but great fun. My highlight of sailing, being on the wire with Jenna that day, when Jordan passed the bar. It was “not for long, but I have the photo and it is on the wall! From Mirrors in Yorkshire to barring at 18 with my daughter in Sydney Harbour. It really doesn’t get any better than that. I am very lucky.”

The Fisher & Paykel team of Jordan Girdis, Elliott Mahar and Charlie Gundy will soon depart Sydney to compete in the Mark Foy Trophy Regatta at Lake Garda, Italy, July 18-20, then return home for prepare for the 2022-23 season on Port of Sydney.

Richard Searle summed up the association with the 18s: “A big thank you to the 18 foot community, the talented sailors, the fantastic support crews and the Winning family. To be part of the 18 and its history is quite incredible. On behalf of everyone at Fisher and Paykel, it’s great to be back!”

Australian 18 Footer League chairman John Winning was quick to respond “It’s great to have such a supportive sponsor in our fleet.”

Sea Change: Why the Electric Boat Industry is Sailing to Northern Michigan

Boyne Thunder and the Art of Boat Jumping